Titled after the Goldilocks Principle*
definition from wiki…

We’ve just come to the end of a great run of waves here on the Isle of Wight, winter is always best for surf here but i cant remember such a run of quality swell for quite a few years. Some big days, some small, some offshore, some glassy, some cross-shore (or even onshore) and bumpy, some low-tide at the reefs, some high-tide beach-break, and it was fun to surf in them all, for different reasons.

Perhaps it was the pure adrenaline of taking the drop on a bigger day and praying you made that bottom turn, or maybe it was trying to find a little space inside one of the hollow waves created by strong offshores, or maybe it was that smooth gliding feeling of that last glassy face just before the sun went down (i cant really think of a good reason to go with the on-shores yet, except that some days even that is better than not surfing!)

But this blog is about the day when it all felt ‘just right’ the goldilocks day, when the swell was a decent size but not intimidating (still strong enough to snap someones board out there though). When it was consistent  and reliable and there wasnt a 15 minute wait between decent sets. When the wind was light offshore, holding the waves up for that bit longer, but not so strong that you had to take off blinded by the spray. And when for some reason the break wasnt too crowded and for the most part there were plenty of waves to go around.

OK, it might have been nicer if it wasnt so cold, and maybe with a few less people you would have got more waves, but if you’re not happy on a day like thursday 21st January 2010, then i doubt you ever will be surfing here up the channel, and maybe you should look into those emigration plans a bit more seriously.

And a real bonus for me is that a good friend and great photographer Paul Blackley turned up with his camera and got some nice shots of me surfing on this day, so for once i dont just have to rely on memories to bring it all back. 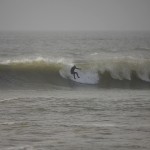 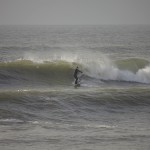 A wider point of view 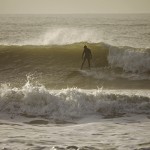 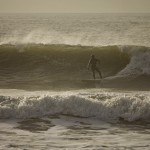 * The Goldilocks Principle states that something must fall within certain margins, as opposed to reaching extremes. It is used, for example, in the Rare Earth hypothesis to state that a planet must neither be too far away from, nor too close to, the sun to support life. Either extreme would result in a planet incapable of supporting life.[1] Such a planet is colloquially called a “Goldilocks planet”. The Goldilocks Principle comes from a children’s story Goldilocks and the Three Bears in which a little girl found a house owned by three bears. Each bear owned a separate copy of many things, such as food, beds, etc. After testing each of the three, Goldilocks determined that one was always too much in one extreme (too hot, too large, etc.), one was too much in the opposite extreme (too cold, too small, etc.), and one was “just right.”