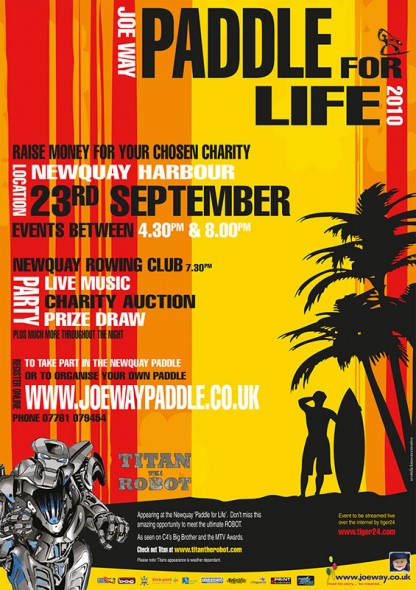 The original Paddle for Life started after lifeguards from Fistral Beach held a Joe Way memorial paddle to raise money for charity in 2008.  Joe is the inspirational little boy who touched people’s lives around the country and beyond.  His story of hope and fighting against all the odds with a cheeky smile has made what could have been the worse of times the best of times.

With little over a week to go, Team Joe are getting ready for the memorial ‘Paddle for Life’ event taking place on Newquay harbour on the 23rd September.

Isle of Wight surfer Johnny Fryer is helping along with Ben Skinner, Tom Butler, Alan Stokes and many others

Promising to be bigger and better than last year; with over 150 paddlers of all ages registered to raise money for 20 charities.  The 2010 Paddle for Life event welcomes the support of two of the many based Newquay companies who will be keeping the paddlers and audience fed and entertained. Robert Ellis, area manager for Bookers Wholesalershas kindly donated £700 worth of BBQ food while ‘Titan the Robot’, (as seen on C4’s Big Brother and the MTV Awards) will be making an appearance throughout the afternoon, keeping the crowds entertained.

With an outstanding amount of interest already shown and the sheer number of people willing to support and raise awareness for their chosen charities; founder for the Joe Way Appeal, Matt Way, shared his thoughts and feelings ahead of the event saying; “we sent out to inspire children and adults with Joes story and we are never disappointed, the support has been overwhelming and we are estimating 2000 people will watch the event live on line which should encourage donations from around the world to over 20 charities.”

Some of the biggest names in surfing will be at this event and with so much to do for the children this is an experience not to miss.

This event is for any age and any ability, you don’t need to be into surfing/paddling to enjoy yourself, it’s about raising awareness for your own charities, remembering your nearest and dearest that have been affected by an illness and most of all to keep the memory and what Joe’s cheeky way of dealing with the worst of times alive.  The event will start next Thursday from 4pm.

The paddle team are aiming to raise £10,000 at this years event to celebrate Joe’s story for over 20 charities so don’t miss out on being part of this special little Cornish toddlers story.

For those of you that can’t make it in person, the event will be streamed live byTiger 24 and can be seen on www.joeway.co.uk.