This Saturday sees the start of the IOW Surf Club Frost Bite Series!

How will it work? First Saturday of the month that has contestable waves means the contest is on. i.e it is a rolling waiting period. 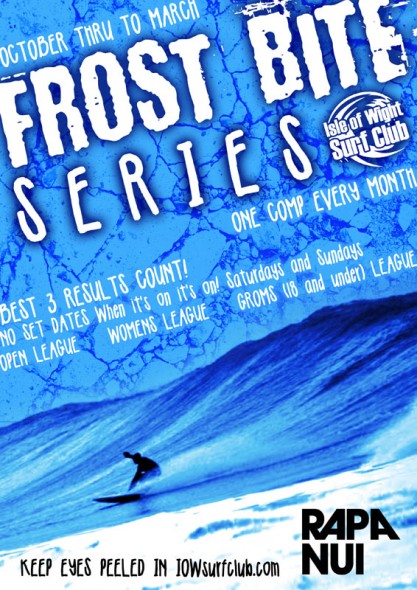 The first ‘Frost bite’ competition of six being held this winter, sponsored kindly by the boys at Rapanui was a great success.

Greeted with pretty grim onshore head-high waves at Compton, first up we saw the groms test the water. Both Robin & Dylan snagged plenty of waves each but Robin gradually took control with a couple of good waves to take the first event. The waves continue to prove challenging for the mens Open, as the pool of 16 riders entered the water in 4 man, 20 min heats.
Julie Tortajada, in the first quarter final, took the Ladies title getting several fun waves. From the first round the following progressed into the semis:

Semi One saw Douglas Richards start to show his quality, making some nice aggressive turns , and following him after a somewhat slow start, Jo’s local knowledge paid dividends, hooking into some good little rights, his smooth style saw him up his wave count and into second place only 0.5 points behind Dougie & just ahead of Rich who surfed well in both his heats.

In Semi Two, Matt, keen to progress, started with a bang – getting several scores on the board in quick succession. Al also posted some scores whilst Jamie & Nick, who both showed good form earlier on, were quiet until the last quarter, when Nick started to make a come-back, but too little, too late saw Al & Matt progress into the final

The Final was closely fought battle , the waves failed to improve, which saw the judges favourite going into the final, Doug, making a subdued start. We did see glimmers of his solid style, but the waves just didn’t go his way. Matt, with a great high scoring first wave, continued to post some respectable scores, streaking ahead on wave count alone, Al found a solid right all the way into the inside, showing some style with cross-steps & smooth cutbacks. Jo’s consistency and nack for finding those fun inside walls, meant he edged ahead of Al into second and Matt taking the top spot with skill & tenacity.

The IOW Surf Club would like to say a big thank you for all turning up to make it a great little event. Hopefully we’ll see even bigger competitor numbers, in the next round in the IOW Surf Club Frost Bite series, as what seems like a 1/3 of the IOW surfers return from their Indonesian adventures! Boys, you missed out today !

A big shout out for all girls & groms wanting to get involved. I’m sure Julie, Robin & Dylan would love to beat you in heat & there’s hoodies, t-shirts & other prizes to be won !

It costs £2.50 per comp for existing members

£10 for non-members, which gives your Isle of Wight Surf Club Membership also including your BSA Membership www.britsurf.co.uk/bsa-membership

And that brings me to a last big thank you to Rapanui , who are very generously sponsoring every event of the Frost Bite Series.

For those who haven’t heard of them, Rapanui are an award winning Eco-Fashion company based/born’n’bred on the Isle of Wight.