Managed to catch a few decent swells over the christmas and new year break, boxing day was probably the pick of the bunch with lovely clean uncrowded waves at Compton Bay. The set waves were consistently head high and there wasn’t a breath of wind which is always a bonus in winter.

We had another nice clean day (pictured here below) on Sunday 3rd Jan 2011, the swell was a bit smaller, mostly waist to chest high, but with the very occasional head-high wave if you had the patience to sit our back and could bear the cold long enough.

It was also the day of the latest frost bite surfing comp organised by the Isle of Wight surf club, and my good friend Paul Blackley was taking pics after having a surf earlier that morning. You can see a set of Paul’s contest shots and read more about the contest here http://wightsurfhistory.co.uk/iow-surf-club-frost-bite-event-no-3/

I wasn’t in the comp, but Paul also grabbed a few of me on my big red longboard, including one of those choice set waves that made the whole thing worthwhile. 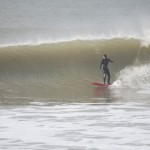 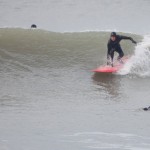 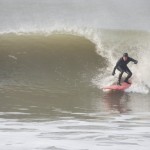