Finally got some time to take some pics and write a few words again… and of course we finally got a good clean swell out west.

So Big Wednesday…. Woke up to all the breakfast TV channels showing footage of ‘The Eddie’ taking place at Waimea Bay, Hawaii in Epic conditions called at between 20-30 ft, which i mention because it puts our big wednesday into perspective. But although it may not have seemed quite as impressive as what was on the TV, double overhead sets at Freshwater Bay can seem pretty intimidating when you come face to face with them in reality. I dont know what size to call our swell at, MSW reported 7ft at 17seconds and all i know is that there were some big faces on the set waves. A few people said they’d guess at 20ft faces on the biggest ones.

Problem was that most of the sets were close-outs, and for a lot of the time there were around 10 waves to a set, thats a lot of water hitting you on the head if you took the wrong wave.. ie; like i did the first wave of a set, and the rip was pretty evil too so you quickly found yourself on the wrong side of the bay and uncomfortably close to the big rock on the left.

So my surf consisted of a freak misleading paddle out during a lull where i didnt even get my hair wet, followed by one wipe out, one set wave which i got an ok ride on, a lot of duck diving and ultimately the walk of shame back from the far end of the bay when i got swept over there.

I say the walk of shame, but i saw a few people take it today, far better surfers than me, so perhaps it was almost a walk of glory for being out there and getting back in one piece.

The light was flat grey and crap most of the day, really poor conditions for photography (with my limited kit definitely) but i hung around and took a few anyway. Not many rides were to be had in the challenging conditions. Wave of the day that i saw, was shared between Joe Truman and Lee webster, i say shared, Lee dropped in horrendously, but they were smiling about it afterwards and neither are the type to get stressed about stuff like that.

Big Thursday report & pics to come… the sets were still big but the sun was shining and even if i didnt do great surfing again, the pics are a lot better with some decent light. 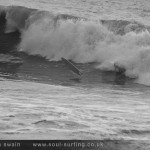 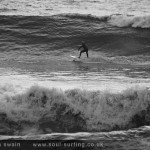 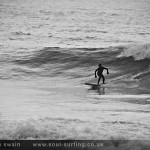 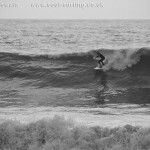 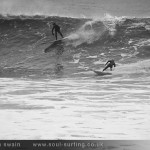 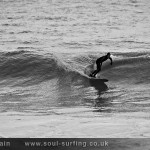 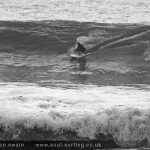 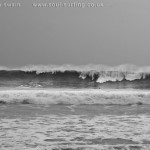 Closeout across the Bay